What feelings and emotions come to your heart and mind when you read or hear the single word, Mother? The reactions among different people may range from positive to negative, to perhaps neutral. The reaction to that single word depends on the life experiences that we may have had in relationship to the person(s) which that word represents.

Now, let me modify the word to “Mother Mary”. What feelings and emotions come to your heart and mind now? Are they different from the single word, “Mother”? The shift in the power and energy that the two words “Mother Mary” evoke probably depends on whether you have a Christian background and/or have friends of that denomination. If I were to ask the same question of a tribal who lives in the Amazon rainforest, what would their response, if any, be? And what about words like Durga and Kali, which evoke the divine feminine who is currently being celebrated in ‘a nine days and nights festival‘ in India?

The spiritual power of certain words, phrases, combination of words as prayers, mantras, and such, is well established. There is a scientific basis for the power and ability of words to convey certain energy. The basis of word power and energy is the mechanism of vibration. At the particle level, we are all atomic, vibratory beings. So, it would be natural that the vibrational energy of words would affect us in certain ways. In addition, certain words and prayers, repeated millions of times by cultures over time, attain special significance and energy. One such word which has spread universally from Indian (or Vedic) culture is AUM (or OM). Are there words or prayers that have achieved ‘special energy’ status in your language or culture?

Words, particularly when spoken in the language of the listener, confer thought, ideas, meaning and transformative power – Swami Sarvadevananda

The ability of certain words to affect us negatively, when spoken in a language which we can understand, is also powerful. The power of their words to send us almost instantly into a state of anger, dismay, rage, even hatred, has been felt by many of us. This is where our spiritual practices can help us. If we learn to keep track of our ‘trigger’ words and the situations in which we are particularly vulnerable to those triggers, we can take action. We can align and harmonize our practices to set up ‘early warning systems’ for such words, people and situations. ‘Trigger-word’ awareness is a bit like being the ‘squawker goose’ in the flock of geese sitting in the middle of the river who alerts the flock that a human has been sighted on the shore!

So, words have power, energy and the capability to set off positive, negative or neutral vibrations within us. By choosing words which empower and energize us, we are likely to empower and energize those in our energy field. By repeatedly choosing words and word combinations which enhance our own spiritual well-being, we can transmit universal positive and healing energy. Let us be empowered to speak healing words, or simply keep our silence. Such awareness and practice would be a sign of spiritual growth, yes?

P.S. Today’s blog post was inspired by a talk titled ‘The Science of Mantra” given by Swami Sarvadevananda of the Vedanta Society of Hollywood in Cleveland on September 22 2019. It inspired a lot of questions about ‘word power and energy’, and I look forward to sharing some of those questions with you in our weekly twitter chat. Join us, Sunday Oct 6 at 9amET in #SpiritChat – bring your ‘power words’ and ‘trigger words’ to share. Namaste – @AjmaniK 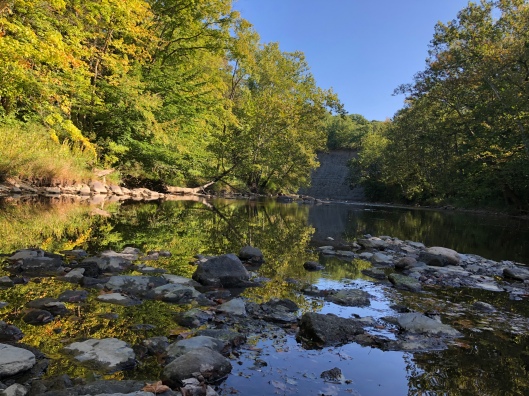 what words does this photo evoke? what energy do they transmit to you?